Right, so, while waiting for a collab project to finish (as well as working on more involved stuff), I made a couple things for the latest Pirate Kart thingie over on Glorious Trainwrecks. Have a look if you like short crappy games and/or camels.

I also opened a tumblr where I’ll be dumping, errr, visual experiments? (I can’t bring myself to call this art, ah ah), WIP screenshots and the occasional reblog. It’s right over there.

So, 2015 started as shitty as 2014 ended, which made this thing (which normally could have been done in like two days) take ages to finish. Anyway, it’s here now. Introducing Gat Life, an exciting new IP. Grab the first episode on itch.io (widget below) or GameJolt, your choice.

I normally would have added more words, but I’m knackered and my brain has turned to soup over the last few days so I’ll just shut up and save it for later. 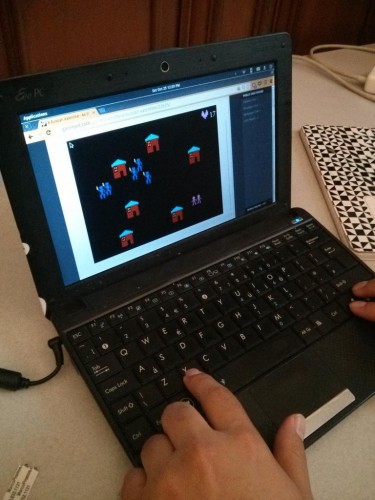 (Many thanks to Deirdra Kiai for the picture!)

Not sure if you can tell :p but it’s set up and running in the arcade room at QGCon 2014. Releasing a game in the wild is stressful and scary, but seeing people on the other side of the planet playing it is priceless.

Reposting this here because it’s my damn blog (who reads this thing anyway?) and I’m kind of proud of it:

OK, I misread the tweet and thought there were 111 seconds (honest!). Still, that was fun. I’m almost tempted to dig out my Perl cookbook to see what else could possibly be crammed in 140 characters. Almost. 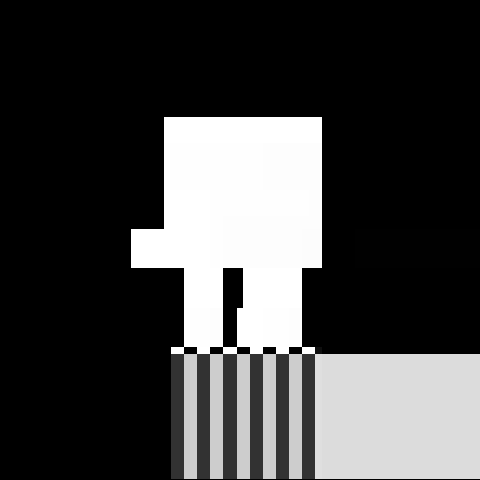 This small commandline tool by Andi McClure takes your png files and transforms them in interesting ways. It’s available in source form on bitbucket, you can get a ready-to-use version here, bundled with a small howto (which is reposted below; hopefully it makes sense, let me know if you have problems with it).

But first some samples of what it can do:

1) Unzip the folder somewhere, you’ve probably already done this if you are reading this :). I suggest putting the folder as near as possible to the root of your hard drive. For instance, mine is in c:\tools.

2) Open a windows command prompt, it’s somewhere in your start menu. If you can’t find it, you can also launch it by pressing the Windows key and ‘R’, and typing “cmd.exe” in the box that appears.

3) Type “cd”, a space, then the full path of the badpng folder. If the path includes spaces, you have to put it between double quotes, otherwise windows will get confused. That’s where it pays to have short, space-less paths for those tools. Here’s what it looks like on my machine:

Press return and you’re inside the badpng folder.

4) Now all you have to is launch badpng with the path of your source image, and the path of the saved image. It looks like this:

If you don’t like typing, you can copy your image(s) to the folder where badpng.exe is, so you don’t have to type the entire path. It would look like this:

– You don’t have to use the “cd” command to move into the badpng folder, you can use badpng from anywhere if you type its full path so windows knows how to find it. It looks like this:

(of course the paths will probably look different on your machine).

– If you do something cool with it let me know (@emptyfortress on twitter), I’d love to see it.

If you like ASCII art, maybe you know about JP Lebreton’s EDSCII tool, a pretty nifty ASCII art program with colours and character palettes from a variety of 8 bit machines, among other things.

Of course I had to go and add the Amstrad CPC palette and character set, you can grab them here. Unzip in your EDSCII folder, you can load them in the program like any other palette, by using the built-in commandline (TAB key) and typing “char cpc” for the cpc charset, and “pal cpc” for the cpc palette.

Sometimes you want to change the style of a short snippet of text. Here’s a quick n’dirty way to do this with links.

1- Create a stylesheet passage (that’s a regular twine passage tagged “stylesheet”). What you want to do is create CSS rules for html <span> elements which are in Twine passages, and apply them to your chosen bits of text. If you don’t know what a span element is, that’s ok, you don’t need to 🙂

Assuming you want some links to be blurred, and “un-blurred” when the mouse is over them, your declarations could look like this:

Change “blurredlink” to an appropriate name, and put your CSS code inside the curly brackets.

2- In your passage, put the link you want to style inside a <span> tag, and give the span tag the CSS class name you defined in your stylesheet passage. Like this:

This can also be used for regular text, not just links, just remove the “a” and “a:hover” from the CSS declaration, like this:

Here’s a short demo, you can also grab its twine source file (right-click, choose “save as…”). Hopefully this is useful to someone somewhere.